It all started innocently enough on that blustery January night.

As an introductory get-together, I arranged to catch a little music and a drink at a pub with a person I’d met casually a few days before. I thought that we might enjoy some light conversation between the music sets and get to know a little about each other.

With the fierce snowstorm and the dangerous driving conditions, I began to question the wisdom of driving anywhere that night and as she lived nearby and figuring I could walk home if the weather further deteriorated, I phoned and suggested that I’d bring over a movie to watch to save us the trek outdoors. She readily agreed…perhaps in retrospect, too readily!

I put her acceptance of our change in plans down to a good natured flexibility. How wrong could I be? She was way ahead of me on this one!

Drinks were dispensed shortly after my arrival at her apartment. The atmosphere was welcoming and relaxing. Aromatic candles were glistening everywhere. The lights were low. Soft romantic music was playing. Easy casual conversation helped us to get a cursory knowledge of each other.

Presently, she brought up the subject of watching the movie I had brought and explained that her television and DVD player were in the other room where we could watch the movie.

At that, she bounced gleefully into the TV room as I soldiered dutifully behind. As I entered, I noted that the TV room was also the bedroom….and there was no place to sit.

“Just make yourself comfortable on the bed,” she whispered suggestively. This should have immediately set off piercing alarm bells screaming in my head. This is strike two, I admonished myself. The first strike might have been coming here in the first place. I’d better brace myself for strike three!

Seeing no escape alternative, if at this point the devil within me really wanted one, I arranged the pillows as a back rest so I could sit comfortably to watch the movie. Once they were suitably arranged, I settled myself down ready to enjoy the video.

While I was arranging myself on the bed, she fed the DVD into the player. Despite numerous “apparent” attempts at getting the movie to play, she exclaimed, “I can’t get the damn thing to play!”

You could almost see the scheming wheels accelerating in her head. “I know I do have something that will play,” she announced, and as if by magic she produced another disk. The machine engorged this one which immediately started to play. It was a fireplace video along with its quiet audio of crackling logs combined with romantic music which, as you can imagine, immediately heated up the surroundings.

“Aren’t you warm?” she chirped teasingly as she started to remove her sweater. “I don’t want my clothing to get wrinkled. I have to wear it to work tomorrow!” This concern seemed to give her excuse to disrobe more as she slipped under the blankets and started nestling closer to me, obviously to keep warm.

“Won’t you come under the covers?” she tempted.

I should have seen all this coming. I could sense strike three rapidly approaching. 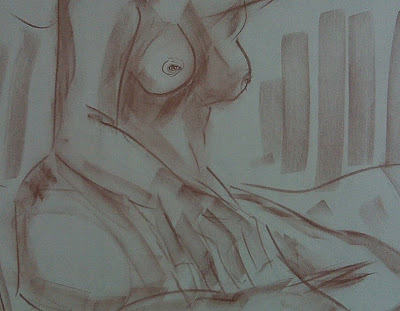 In the jungle, hungry carnivores know the habits of those they’re stalking and use this knowledge to skillfully move in for the kill. Was I the victim tonight?

Now, I’ve got to pinch myself to wake up and try to figure out whether this whole tale is fact or fiction—whether it has a figment of truth or is completely a figment of my dreamy imagination. You decide—because it shall remain a secret with me!

Whether fact or fiction, however, the time-worn moral of the tale is true. Be wary of hungry cougars prowling in life’s jungles as it’s near impossible to outfox a scheming and cunning cougar which has you lined up in its sites.
Posted by Site Administrator at 8:45 PM

Really entertaining. The cynic in me says, "Oh so true!" but the young boy in me says, "Where do I find a cougar?" ;)