The roar of the mighty Yangtze River was deafening as it funneled into the narrow gorge formed by neighbouring mountains in a remote part of Yunnan Province in South West China, where few foreigners had ever been. For that matter, only a few locals accompanying their pack donkeys would ever venture along the narrow mule track blasted out of the mountainside, high above the unruly river. But here I was!

There are those times in your life when unforeseen situations and circumstances, in retrospect, keep raising the question…What if? What if? What if? And this was one of those defining times. A time when twenty seconds was the microscopic juncture between the “here” and the “hereafter”; the great divide between Heaven and Earth—a gulf measured in seconds; an escape too close for comfort. Like the nine lives of a cat, this incident, I believe, subtracted from my lifetime quota of “close calls!”

I was taken to this desolate place by the dean of my university department at the Yunnan Finance and Trade Institute where I was employed as a “visiting professor.” The dean had grabbed some government grants to do some tourism research in some out-of-the-way places in Yunnan that had not yet been promoted for tourism. I was the guinea-pig foreigner whose opinion would factor into potential development decisions of the region, which had previously been declared a UN World Heritage Site.

The place was known as Tiger Leaping Gorge, billed from the top of its mountain peaks to the depth of its river bed, as the deepest gorge in the world. I thought it might be equally billed as the loudest place in the world from the wild water fighting its way through the narrow gorge, or the scariest place in the world in our aerie perch from which we observed the battle far below. This perch hung from rock venturing straight up to the mountain peak on one side and straight down to the howling river on the other, with no safety barriers inhibiting those who might venture too close to the edge.

Along the way, there was periodic evidence of rock slides, both on our ledge and on the river edge far below. I wondered what the fate had been of those caught in rock slides as well as those who'd been there when the road bed gave way.

You can imagine my trepidation about being transported along this mule track in a van whose mechanical condition, and whose driver’s skills, both were questionable. I also had some serious concerns about the strength of the mule track, winding its way along the mountain slope, hoping it would not give way to the load of our van and driver, myself, and the five Chinese professors on board. But saving face is a big thing with the Chinese, and I couldn’t possibly show the fear I undeniably felt.

Periodically, we did get out of the van to converse with the native Naxi people, driving their mules along the ledge, to take pictures, or, when we were able, to climb down to the Yangtze at its most impressive places, like the rock wedged gingerly in the middle of the raging river that gave the place its name, Tiger Leaping Gorge. Apparently, as legend has it, a tiger leaped across the river at this point to escape hunters.

I had no idea how far along this ledge we were going to drive, or indeed where the ledge led to, if it led anywhere beyond a “dead end.” I was beginning to feel, however, that it wasn’t much of a “Sunday” drive, and I had had just about enough.

The answer to my first question, though, appeared in an impervious cloud of dust I saw just ahead. A rockslide threw tons of rubble onto the ledge not 100 metres in front of us, a spot we would have passed in twenty seconds or so. We were close enough to catch the dust! The track became impassible. What were we now going to do? Back up the ten miles or so we had traversed along the narrow ledge?

No! The driver found a wider section of the mule track, to attempt a three-point turn-around. He inched the van forward and backward numerous times, each time with the rear end of the long-body van extending far out over the edge of the ledge. The view straight down from my seat was deadly. It was absolutely terrifying! If ever there was a time to atone for one’s sins, this was it!

Once the driver manipulated the “turn-around,” we thanked our lucky stars and turned to questioning. What if this rock slide had occurred behind us, blocking our return? Would the ledge ahead have led us anywhere? Even worse, what if the rock slide had hit the van? Would we have gotten out of the mess? I don’t know. I’m still shaking from the thoughts of the experience!

Needless to say, though, that twenty seconds proved our sense of timing impeccable that day!

That’s why I’m here to tell you all about it!


Pictures of "The Ledge" at Tiger Leaping Gorge 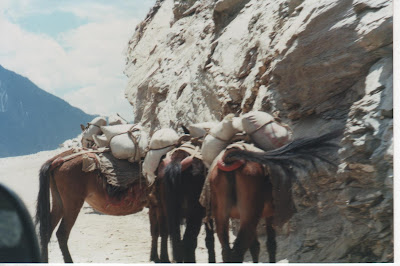 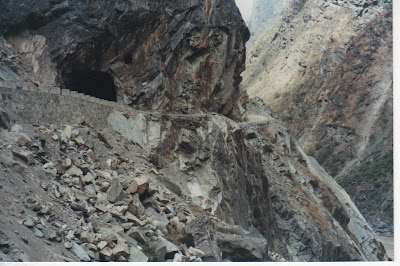 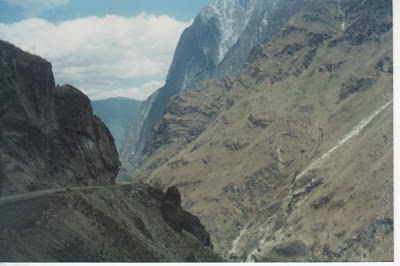 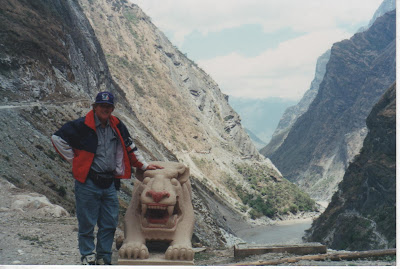 Watch this amazing video portraying the mountain lifestyle of these Bolivian farmers who risk their lives every day and then give thanks for what we have. So many people's in the world live similar lives to these farmers.
Posted by Site Administrator at 11:44 AM